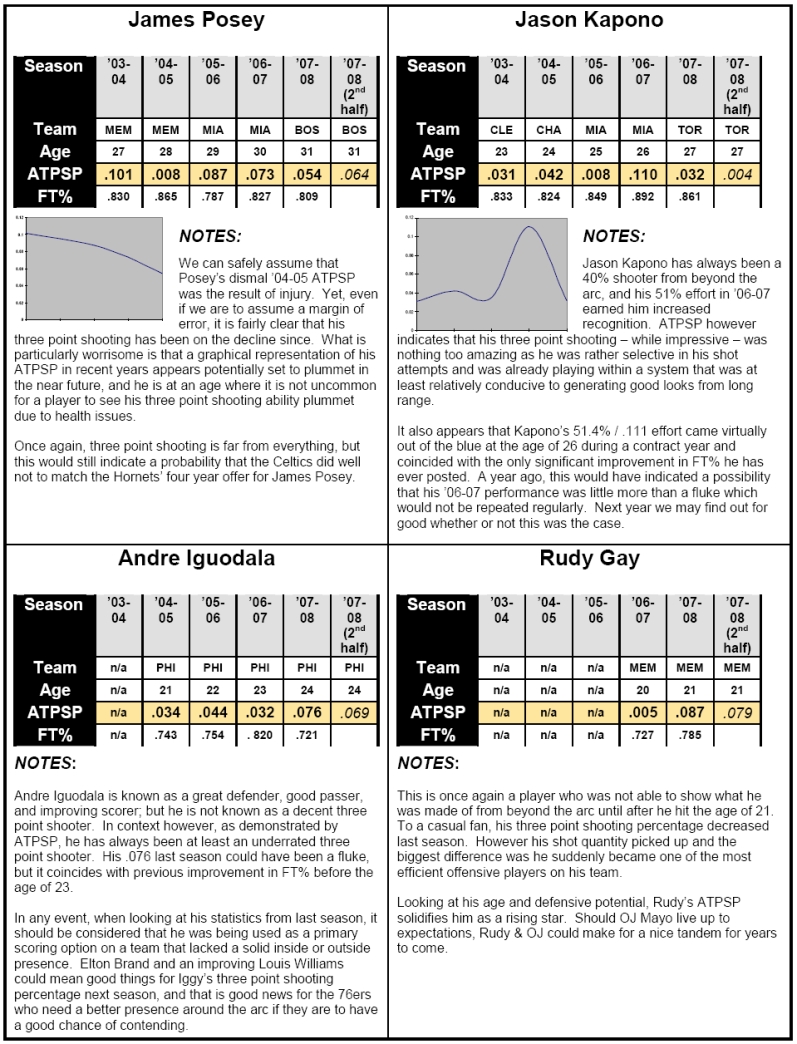 The following tables provide ATPSP projections for the 75 players projected by myself to be the top 75 three point shooters in the league as of next season. Please note that these rankings and projections are subjective, although the subjectivity is based on objectivity ?incorporating both trends in a player’s shooting as well as a player’s age and other smaller, miscellaneous factors.

Also note that when in doubt, I have given players the benefit of the doubt and ranked them a little higher than I may have initially pegged them. The highest ranked unrestricted free agent on this list was Roger Mason, who has already been scooped up by the Spurs. The second highest was James Jones, who signed with the Heat.

While ATPSP appears to do a very respectable job of rating three point shooters, it is inevitably an imperfect statistic that can be improved upon.

The biggest issue I have with ATPSP currently is that there is no consistent method of forming accurate team multipliers for players who either play for more than one team during a season, or miss games due to injury. A player might only play forty games during a given season, but his team multiplier is based on all eighty two games his team played. In an ideal sense, it might be worthwhile to strictly use a player’s “on court” statistics when forming team multipliers, although then players get punished to a larger extent for making their team better. This is a subject for discussion.

Also, given the current formula, a player’s overall offensive efficiency is compared relative to his teammates’ efficiency without regard to whether or not a player often shared the court with certain teammates. For example, a player who gets most of his minutes alongside second-stringers may be unfairly penalized because his overall offensive efficiency was lower than that of his team’s first-stringers. Now I do assume that playing against the opposition’s second stringers helps to balance this effect, but once again there is certainly room for debate here.

Lastly, with the right spreadsheets available, it would be interesting to see how various factors that I have not examined can help predict trends in a player’s three point shooting ability. I do believe that would be beneficial to look over historical ‘second half of a season’ stats, as well as college and high school stats.

Bill Goldblatt is a 27 year old small business owner currently residing in Phoenix, Arizona. Professionally, he is an expert in fields related to both market and patent research, and holds a background largely relevant to small business management and entrepreneurship. On the side, he is a Celtics fan and a sports fan with a working knowledge of Microsoft Excel. He can be reached @ [email protected] with any questions or comments.

Copyright ?2008 by www.nbatop.com, All Rights Reserved